This may be the cutest picture I’ve taken for this blog ever, and I can only attribute, like, 25% of that to my own skills. Okay, 15%.

That amazingly darling tiki bar is the Floating Tiki Bar from Sienia Trevellion of Lark. It comes with the flamingo string lights, which are awesome and will be finding their way into all sorts of my decor, and also the adorable tropical drinks. It’s also scripted to give drinks and includes some really cute animations. There’s nothing about this that I don’t love.

The Floating Tiki Bar is available right now at this month’s round of Flux. Go!! [SLurl] 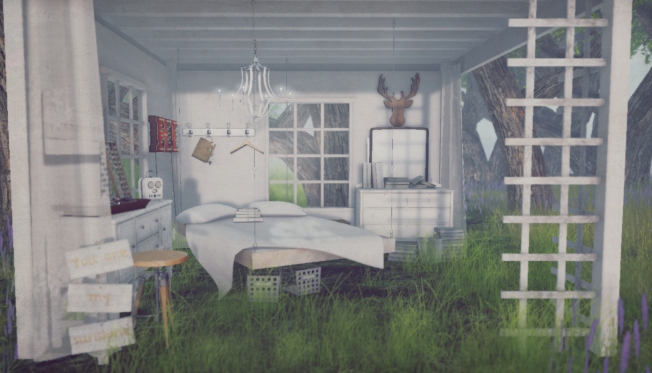 I could use a RL vacation spot like this. Just plop it down in the middle of my backyard. Grass cutting optional. Paradise.

This is the Midsummer Retreat from my music soulmate, Tegan Serin of floorplan., available right now at Collabor88. The set includes the shelter and the hanging bed – btw, you can NEVER go wrong with any sort of furniture that hangs – and the bed has all sorts of lovely texture options for the bedding. I went with all white because I wanted a very calm, peaceful, sort of zen vibe — aside from the bright red marquee letters, of course. Gotta have that splash of unexpected.

I love outdoor rooms. ♥ The new pergolas from Cory Edo and Trompe Loeil are very inspiring to create these outdoor spaces! Available at FaMESHed, the pergolas are available in super packs that come with all sorts of options – one wall, two walls, no walls…lights, flowers, lights and flowers…etc and so on. Gorgeous. Be sure to also check out the Country Pavilion, also at FaMESHed – it’s a perfectly grand and wonderful outdoor spot that you need in your garden.

The couch is one version of the Sydney Sofa from Rayvn Hynes and MudHoney, available now at The Home Show. I used the white one here because it fit the calm, mostly neutral palette I wanted, but you must check out all of the different color options available! There are, like, a million. Or twelve. Somewhere around there. And they’re all just beautiful.

Also, this is my new favorite dresser – the Alice Dresser from fri.home, available at The Home Show. It’s also available in white, and is just so perfectly classic and just the tiniest bit shabby and I love it. Hard.

**items available at The Home Show

Do you realize how many awesome events are STILL going on? We’ve had so many so far, it’s really easy to lose track. But trust me – there are still LOTS of events that you need to check out.

I love this bed from Isla Gealach and Cheeky Pea – part of the Abbotsford Bedroom set currently available at The Garden – and those chairs!!! Those are the Deconstructed Armchairs, also from Cheeky Pea, available right now at The Home Show. There’s a whole deconstructed set that is amazing and you must check it out. You.

Also – along with all the awesome in that first pic – how much do you love all the things that {what next} has been releasing lately? Specifically here – the ice cream cart. THE ICE CREAM CART ON A BICYCLE. Genius. Love. Winter Thorn continues to do just amazing things with mesh!! ♥

Places you need to go:

Today is a big day!! Summerfest ’13 is open, and it is full of summery awesome!

Second Spaces is happy to be a part of Summerfest, and I’ve got two new items available! 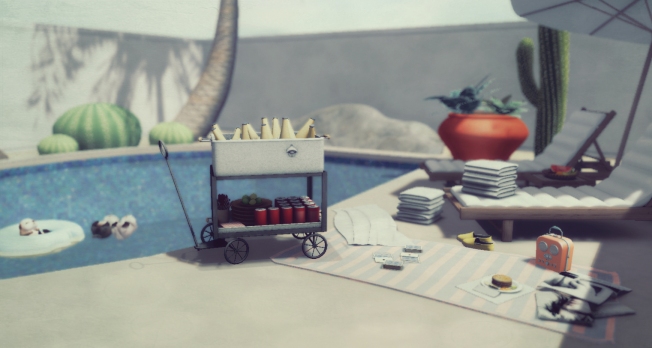 First  is the Poolside Beverage Cart – a vintage piece, stock full of refreshing drinks and adorable picnic items – you need this for your next pool party! 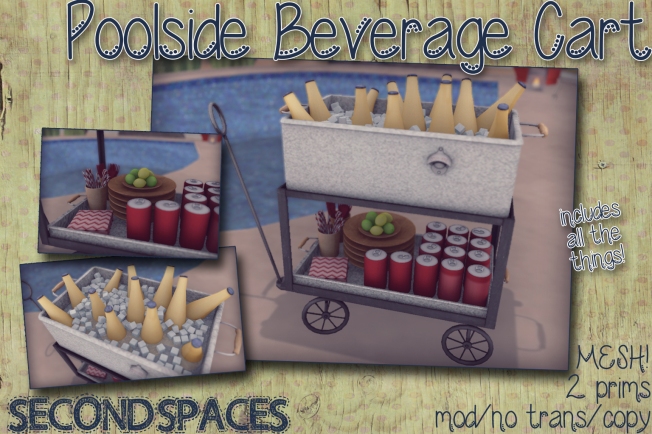 Then we have the City Pool Storage Lockers – salvaged from the now-defunct public pool in Ahern, these lockers are great for storage anywhere, inside or out! The full set is available, including the shelving and all the lockers you could want – or you can buy the lockers-only set, which comes with three configurations of lockers to suit all your storage needs. 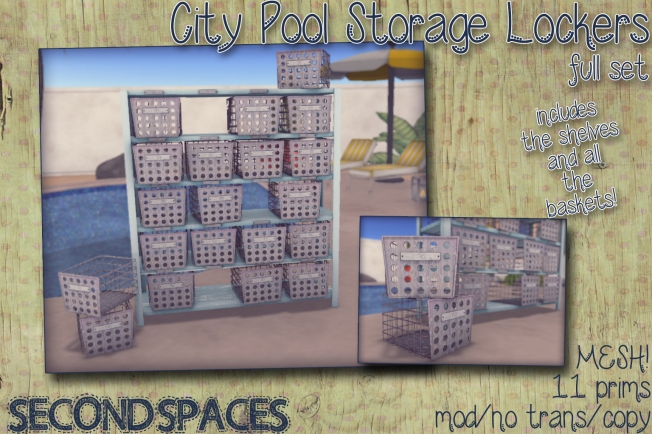 ++ available at The Arcade

Thanks for checking me out - and looking at my blog, too. :) It's all about SL home and decor here - please see the "About Elle" tab for more about..well, about me..and check the "Review Copies" tab if you're a designer interested in being spotlighted here. Thanks!